Tue, Feb 11, 2020 Sorting and Filtering On Traffic By Country

Let's say that you wanted to know which stores were popular with people from a specific country. As an example, we'll try to find the stores that are most-visited by people in Canada.

One approach is to filter stores based on their country of operation. In this case, that means filtering on Canadian ecommerce merchants. While this approach will return decent results, it doesn't answer the original question since it leaves out stores, popular with Canadians, that operate outside of Canada.

To support this use case, we've added 2 new features.

Sorting by Traffic From Country

Once you select one of these sort options, a new Traffic from Country field will appear that lets you select the desired country. In our example, it will look like this.

Sort by traffic from country.

Filtering by Traffic From Country

Now let's say you want to filter on traffic from a specific country. In this example, we only want to return stores among the top 25% of traffic from a country.

To do this, you'll need to use Advanced Search and configure the following filter: 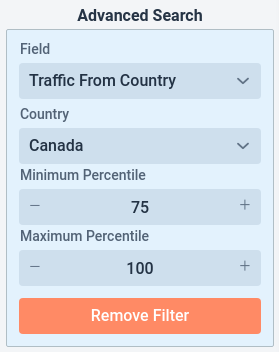 Filter by traffic from country.

These search options can be combined with all the other options we support. This makes it easy to answer even more complicated questions like: "which stores, based in the US, are popular with Canadians?"